OK
Use VIN Manuel select
Your basket is empty. 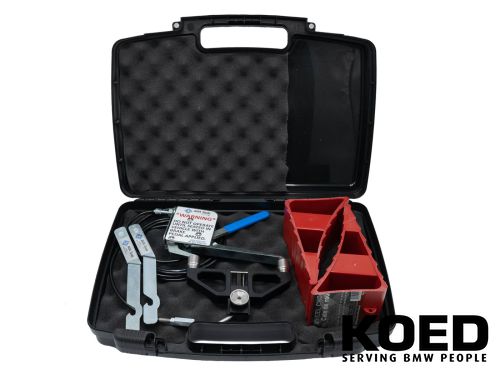 Have to offer roadside assistance to a newer BMW fitted with a 8HP transmission?

From 2017 and up the 8HP transmission can't be released with the traditional screw system if the battery is drained, or it suffers from other malfunctions in the electric system, or det car simply can't start.

Instead it’s released with a flimsy wire/ hook solution, which has to be done while lying UNDER the car. In BMWs official instructions it’s highlighted that there’s ‘Danger of injury, risk of damage’ when using BMWs tool (01 54 13 (058)).

The AGA Park Release Tool eliminates the risk of being hurt, or a vehicle rolling away. A special bar snaps on to the hydraulic release arm and is quickly fixed with the magnetic release handle. When seated in the car, and pressure applied to the brake pedal, the operator can now safely release the park function, and put the car in neutral.

This tool is a must-have for any BMW workshop, and should be a mandatory part of the toolkit for everyone that offers roadside assistance.

Note: From 2014-2017 BMWs can be fitted with both type of 8HP transmissions (hydraulic unlock and unlock by screw)